Denizen of the Druid Mysteries 1

When Williams learned I would expose the secrets of his Druid circle, he cursed me in no uncertain words.

“Yellow spawn! ” he spluttered, “ I read thy evil heart. If thou darest write of our ancient mysteries, thou shalt be curst with plagues worse than those of ancient Egypt.”

I knew his power too well.

He wrote for me, at that time, the name of a certain powerful prince on a piece of bark: and he added a word, and a number, and he burnt both; and that prince’s people changed towards him; and that man was obliged to flee for his very life.

“So shall I write and burn your name?” Williams asked.

But I shall write — despite Williams — and if God wills, the world shall read, and know of all these doings.

The cult of the Druid circle extends throughout Europe and I must tell the world of it all.

But whether it was my nerves that had broken down, or whether Williams. had poisoned me, my health began to fail rapidly after his threat: so great is the power of suggestion.

At night as I lay in my luxury Taylor Wimpey apartment in The Denizen, it was as if a thousand red ants walked up and down nibbling my body: or again as if red-hot needles ran through every toe and finger. Golden Lane and Cripplegate became a torture chamber to me.

I know I was very frightened and went to Brighton on the south coast of England to be treated by a herbalist. Sometimes I would shriek aloud and the orderlies would fly to my bedside in fright. Since nothing tried in south Wales worked, I returned to The Denizen in the City of London.

A doctor was sent for who diagnosed my disease as a bad attack of puerperal neuritis due to some unknown toxins in my system. He advised me to go to Paris and get an expert’s opinion. I think, I was mad for awhile, for I believed that a man in north Wales had written my name and number on a bark, and had injected these toxins in my blood by his will.

I had cursed Williams in turn, crying out that I too was powerful and learned in spells: that they forgot that for nine years they had worshipped me as the world-mother.

The Bard came to see me, and with him was Williams.

They asked me not to worry myself and to return to Harlech. But some new fear of them had entered my mind and I refused. They left me sadly. When I was better, I began to write.

The Druid circle is the circle of the worshippers of the left-hand path, whose secret none but they of this circle have known till now.

In this circle, the woman is the “mother” — but all her desires are fulfilled: that is the vow.

Few women come through the ordeal pure, unstained: for it is believed that the husband is born of the mother, and the mother and the wife are interchangeable terms in the circle. Incest, to them, is a holy sacrament!

The outer court of the Druid grove of the goddess was heaped with raw-flesh, fish, and these, with wine, were given to those of the outer circle.

Man after man, woman after woman passed by me, singing, reeling and dead drunk.

Later on, they would be forced to drink the forty-two bottles of wine prescribed by the rules of the ceremony: eat, drink and be merry and die: for their doom — poor fools — was already on them.

They would not remember anything on the morrow. They would not know that their KaIuse (I prefer the Egyptian word here), their vital spirit, loosened by intoxication and passion a little from their bodies, had been captured and absorbed.

I still remember that inner courtyard of Harlech Castle. Stark-naked men and women, who, from time to time, with excruciating yells, leapt to their feet, shaking their heads backwards and forwards, the women with loosened locks falling in black disorder about their heaving, shaking breasts.

The outer circle absorbed the essence of murdered animals: the inner absorbed them: from the highest to the lowest in the universe one lived by sacrificing something.

It was fair according to this cult that Godhead should demand a sacrifice. In the sacrifice of others alone lay his godhead.

What is to be the end?

Will the world belong to those who absorb the most, or perhaps that One will, indeed, absorb it all in Herself again as more orthodox Druids declare, like the spider absorbing its own thread?

Is it for secrets like these we of China come to seek wisdom? Let me tell of them here. I met a European who was one of Williams’s pupils. He called himself by the number 333, his real name was Basil Bunting. In the beginning he was almost handsome, afterwards he grew gross. The man of the Goddess should be beautiful.

He had many women at his disposal and he spoke of them quite calmly and openly. He said that he had several children born to him by them thro’ magic.

He learnt many magical processes by which he drew into his circle great phantoms.

I witnessed one of his evocations. He had, with him, a pupil, a thin, long-nosed boy for whom I conceived a great pity.

He was so eager, so thrilled at all and so sincere. He sat very still, his eyes on the tip of that long nose of his, his long thin hands resting on each other, his legs crossed in the lotus posture. I wondered why he had followed the man whose number was 333. For his soul’s sake, for the acquisition of good, or, for the acquisition of power?

I suspected, always, that the last was the greatest force of all — for the poison of desire is hidden so insidiously in the flower that calls itself goodness as to be unseen before it darts out too late to recognise, to kill.

Bunting wore a ceremonial robe, had a pentacle, a wand, a sword and a cup. I watched him from my corner solemnly cleansing the altar with water shaken in drops from a blade of grass: and heard him chant Brythonic mantras; whilst Welsh acolytes waved censors of incense.

To the beasts the consolation of laughter is denied. I wished that Bunting and the thin boy could have laughed.

I can still see Bunting. He was tall and handsome. He had a strong jaw on a massive neck and in strange contrast, he had small, womanly hands showing up in the dusk, clear white patches, against his black robe.

I watched that day the spirits he evoked with the help of the Bards. They came first in smoky vapour, emanation of the impurity that comes from desire, and surrounded him like a smoke cloud.

I saw spots form in that cloud, and each spot dragged round itself a little more, a little less of his vital force; then enlarge and fall into the shape of phantom-figures called from the forgotten sarcophagi of the world one of whom crowned with a diadem and wearing an Egyptian headdress of sorts came forward threateningly.

All Bunting’s own life force — expended at will on concubines, or evocations, and — afterwards?

Afterwards! These withered husks of rash men and women declaim against God, the Goddess and man; and vainly cry out for the happiness that life, no longer, holds for them.

Have they who cried out ever added an iota to the happiness of the world? They who expect gods, men and beasts unceasingly to contribute to their needs? 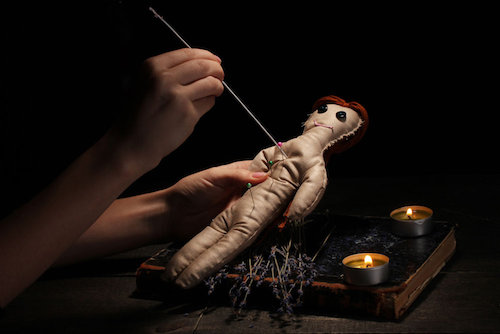 I saw Bunting fall to the ground frothing at the mouth. Yet he was training his pupil for the same ordeal.

Bunting wanted his pupil to strengthen his will-power and alertness. He told him not to use the word “the” or “no” in any conversation – and should he unwittingly transgress this injunction, he must gash himself on the arm with a knife so as to remember his mind’s desire. This method, he thought, made the brain watchful.

The poor boy was covered with gashes.

I am saddened for these wasted lives and I hope the reading of this slender treatise will prevent the misguided enthusiasts of the world spilling the enthusiasm of youth before strange altars to unknown gods.

Denizen of the Druid Mysteries 8

One thought on “Denizen of the Druid Mysteries: 7”